Long, Last Her By Kaitlyn Arayata 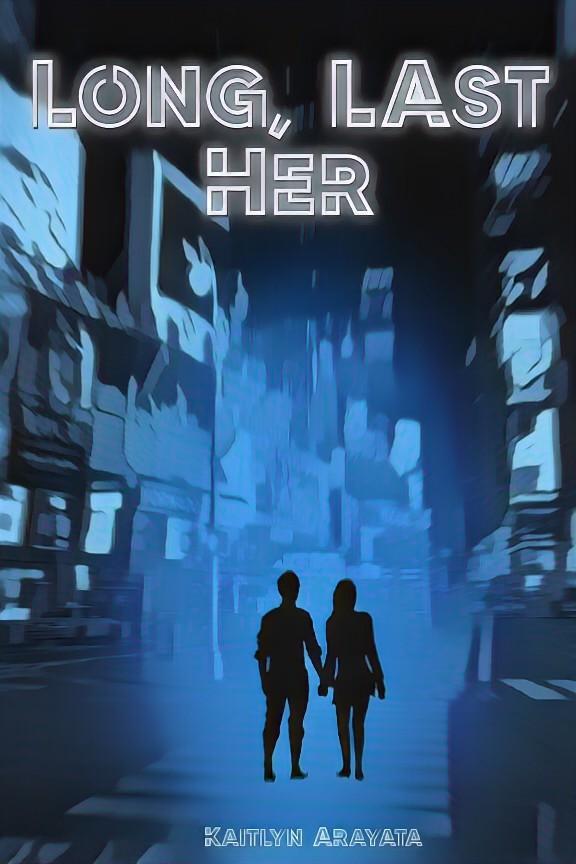 "GET HER!! SHE HAS ONE OF THE EMERALDS!!" one of the guards yelled. The chase was still on. Iris stopped on the rooftop, 80 feet up from the ground, far from another rooftop.

Iris did not say anything. She jumped as far as she could and reached the other rooftop.. barely. She was dangling and one of the guards pulled out his tranquilizer gun ready to shoot.

Iris fell 80 feet off the rooftop with a dart in her arm, and there was a loud thud. One of the guards, Kai who was guarding the entrance, heard the thud and looked at the trash bin. He tippy toed, took out his gun, and slowly walked towards the bin. He saw a girl, light skin, wavy black short hair, and wearing all black with a mask. Iris. He carried her out and brought her to his base. He got in the building and told his boss's son, River, that he found a girl in a trash bin. “That’s strange.. Why don’t you bring her to my dad.. I mean boss!? He’ll know what to do.” said River.

As Kai was bringing her down to the basement through the elevator, he noticed that there was a bright green emerald that was so shiny it could make you blind in her pocket with a dart in her arm. “Hey.. did she steal this..? And why does she have a dart in her arm?” Kai questions himself. He arrived at the basement.

“Hey boss.. I found this girl in the trash bin.” Kai said.

“Get a chair and tie her to it. I want to know why she was here and who she is.”

Kai did what his boss said.

Iris was looking at her surroundings cluelessly and asked where she was.

“What do you mean, you came here.” said Kai’s boss

“Well.. I found her in the trash bin..” Kai said, interrupting Iris.

“SHUSH! WHO ARE YOU AND WHY ARE YOU EVEN HERE?!”said Kai’s boss

“You don’t have to be so rude about it, you know.. But HAHAHA I’m not telling you anything!

Kai’s boss went silent and said to Kai, “Let’s go;” Leaving Iris, in the dark and in the basement.

The heavy metal door slammed behind Kai and his boss. Several bolts were locked behind them, securing Iris in this dark basement. Alone and confused she started plotting her next move.

Later on, Iris noticed that they used rope to tie her. She reached for her back pocket and took out that bright green emerald. She found the sharp end of the emerald and used it to cut the ropes. Iris got up and tried to feel where she was going since it was so dark.

Iris got up from the floor and felt that it was a lamp.

“These people should have known to never leave lamps in their basement if you’re going to keep someone here in the dark.” Iris thought to herself.

Iris then figured out that it was the perfect opportunity to look for ANYTHING. She searched and searched then found her laser disguised lipstick on the floor. She opened the lipstick and drew a circle on the door. The door had a huge circle mark from front to back and Iris kicked it out. Now she is out. She was now in an empty room with an elevator right in the middle. She frantically looked around the room for an escape, and noticed there was a vent in the ceiling. She used the strength of her body to climb up the door jam of the elevator in order to reach the opening of the vent. Iris successfully thrust her body into the small vent. One step closer to escaping

A guard came into the elevator and...

“Yea no sight of the girl” said the guard to the walky talky.

The guard left the elevator.

“Phew.. that was close! Now I know they are looking for me...” Iris thought

Iris got out of the vent and out of the elevator. It was an unknown floor with a lot of windows and she did not know where to go..

“HEY THAT’S HER!!” the boss shouted. Everyone turned around.

Iris did not know what to do. She was not thinking. She jumped out of one of the windows and fell in a bush feet first.

Iris had multiple cuts from the glass and branches and bruises all over her body including an injured leg.

It was 2:45 in the morning and Iris was trying to run in the streets of Manhattan with an injured leg while multiple guards were chasing her. She ran in a corner of a building and hid in the trash bin while the guards continued running forward.

Once Iris was safe from the guards she got out of the trash bin.

“Ew.” Iris said to herself as she wiped off the juices and muck from the trash can off of her body.

She decided to stay behind the trash bin and take out her mask just in case the guards might come back. Iris sighed and closed her eyes. She fell asleep there and woke up to a 19 year old guy tapping her on the shoulder at 4 am. He had dark brown hair in a little pony tail, cross earrings, and he was wearing a hoodie.

“C’mon I’ll take you to my place. I just ended my shift” said Kai.

Iris was so desperate that she went with Kai. Even though he was a stranger. Kai helped Iris walk to his place and when they got there, it was a big mansion.

“Wow! Your house is absolutely beautiful!” said Iris as she looked around the gigantic house in amazement.

They both went into Kai’s room.

“You look very tired. You should sleep... I’ll let you sleep in my room ok.” said Kai

Iris thanked him and went to sleep.

Iris woke up to bandages on her body and got out of bed. She found the kitchen where Kai was cooking.

“Ah yes! You're awake! I hope you are feeling better. I noticed all your cuts and bruises so I decided to help when you were asleep, I hope you were ok with that?” said Kai.

They both went to Muchi’s Sweets and Treats and both got ice cream. Iris got cookies and cream and Kai got chocolate. They sat, hung out at the park, and talked all day long, forming a memorable friendship. It was getting late and Iris and Kai were heading to his mansion. They were both lying on the couch, exhausted from the day they just had. The day turned into days, and the days became weeks, even months throughout Iris's stay.

“So this is the girl that stole your emerald?” said Kai’s boss as he pointed to the security footage.

“Hey Iris! I’m leaving for work for my night shift! Could you buy me some snacks? I left money on the counter!” shouted Kai, closing the door.

Iris came out of the mansion at 9:55 p.m to their local asian market with her mask on and her hair up

“Hmm.. pockies or my favorite guava candy? Both!” Iris thought to herself.

She checked out and crossed a corner.

“GO!” shouted one of Kai’s bosses men with a walky talky.

Iris looked at the man then a van pulled up. 4 men jumped out of the van, grabbing her by the arm and dragging her in the van. Iris tried screaming for help but nobody heard. One of the men put a bag over her head, took out her mask, and put tape on her mouth, not allowing her to speak or see what was going on.

The van door opened and the men were leading Iris into the unknown building. She noticed the hallways were long and there was an elevator, using her only senses at the time; hearing and touch.

“OUCH! And who are you? And you sound really familiar-” said Iris

*Kai came running in the room*

“Yea.. watch this girl while I have a talk with.. You know.. And explain what is going to happen to her.” Kai’s boss said.

“Iris??” Kai thought to himself.

*The metal door slammed behind the boss *

“Iris! What are you doing here?” Kai asked.

“Well.. while I was getting snacks, your “boss” and his 4 men basically kidnapped me and now, I am here.” Iris explained

“So sorry this happened to you!” Kai cried.

“Here.” Kai whispers while untying her.

“Thanks.” Iris whispers back.

“There is a secret back exit right there. Run while you can, Iris!” Kai said.

“But I’m not going without you. Once they find out I am missing, who knows what is going to happen to you!” shouted Iris.

Kai took a second to make his decision. Iris or his boss.

Kai and Iris busted out that back exit and ran into the subway station.

“Yes. The girl is right here-” Kai’s boss said while leading the mysterious man into the basement.

“The girl is not here.” said the mysterious man.

“UGH! ARE YOU KIDDING ME! DANGIT KAI!” Kai’s boss screamed.

Kai and Iris got on the S train and soon much more. They were heading to New Jersey, Jackson Heights in Kai’s other house where they would soon live. It has been hours since they escaped, with no food, water, and very little money. Finally they reached New Jersey in the morning. Kai had no more money left to get an Uber so now they set out on foot. Being on foot felt like forever, considering New Jersey is a place where you have to take a school bus or a car to travel.

“Hey! Iris I think we can take a shortcut through the woods.” said Kai.

Iris and Kai went into the woods just to find Kai’s other house on the other side.

“KAI!” screamed Iris as Kai collapsed on the ground.

Iris took out the green emerald right as Kai’s boss fired. Right before it hit Iris a force field formed around her causing the bullet to bounce off it and hit Kai’s boss in the chest. Kai’s boss dropped his gun and fell on the ground

Iris ran to Kai screaming and crying for Kai to wake up. Kai barely opened his eyes and said..

“Hey!.. Hey!.. Stop crying.. I have loved you ever since we met.. You have been such a great and beautiful friend to me.. And you should always remember that. So don’t cry, just remember our moments together..” Kai stuttered before he shut his eyes again.

She tried using the crystal’s power to help heal Kai but the crystal was shattered and broken from earlier.

Kai later died in Iris’s arms. And one day she'll take revenge on that one mysterious man..