The Ultimate War By Bill Fusilli 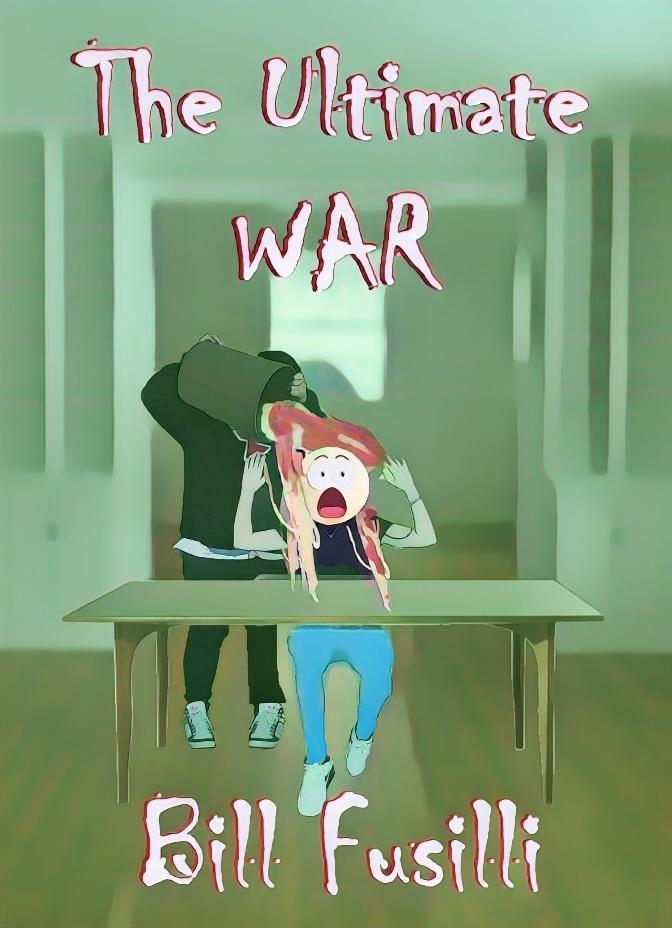 I tiptoed into the bathroom. If anyone caught me doing this, I’d be in big trouble. I grabbed my mother’s lipstick and brought it into Jim’s bedroom where my brother slept. I started to use my mother’s lipstick to make my older brother Jim look like a clown. I had to be quick with it because if my mother found out her lipstick had gone missing she would freak out.

When I was done I ran out the door and dove for the bathroom door and put the lipstick back. When I walked out, I acted like nothing happened. Now I had to play the waiting game until my brother Jim came out - I had to see his reaction. I waited for what seemed like forever and he finally came out.

My brother Jim screamed at the top of his lungs and said, “What is going on?!”

He saw me cracking up and he knew it was me. I knew what I had just done. A prank war has begun. Now I have to watch my back at all times. You can never guess what will happen if you have a crazy brother Jim like mine. He will be down to do anything in order to get me back from the prank I did to him.

So, now it was time for supper and it was at that moment I let my guard down a little because I was hungry. But, my brother Jim was not on the same page as mine; he was plotting something else. In the middle of us eating he said he had to do something - I didn't think of it much. However, that was a huge mistake because a few minutes later he came back and dumped me with 5 pounds of tomato sauce. I felt the weight of the sauce come on me and flop on the ground loud like a slap on a back. Now my face was red, not from the 5 pounds of tomato sauce that was just dumped on me, but from my anger.

I stood up and tackled him. He fell because of the tomato sauce he dumped. I thought to myself “ Ha ha instant Karma.” Now we had to clean up the mess before our mother woke up from her nap. It took an hour to clean up all the mess and we had to change our clothes as well. However, everything ended up well and me and my brother Jim made a truce. Then everything went back to the way it was and we did what we did everyday.

Unfortunately, the next day when I woke up and opened my door I found myself wet when I walked out the door because my brother Jim had set me a trap. My brother Jim came out and started to laugh at me when I got wet by the bucket he placed on top of my door then fell on my head when I opened the door. Now I had to change my clothes and get ready for the day because I was soaking wet. As I was putting on my shirt I was gathering up some ideas on how I can get Jim back. I had to think of something super good that will end this thing. After, I finished the walk out and then I began to do what I was planning to do. I planned to do the same thing he did to me, but better! I got a bucket and filled it with water. Then I gathered a bunch of flour into another bucket and waited for Jim to come out of his room.

A few minutes went by as I waited. But, then he came out and then I threw the bucket of water at him and he got soaked and then threw so much flour that he turned into a white guy. He had to change too. As soon as I did it I knew that today was going to contain multiple pranks. Me realizing that, I ran away and locked myself in my room.

Everything was going perfectly except I was hungry after a while, so I had to leave my room. At this point, I knew my older brother Jim might be waiting for me outside my door. So, I put my ear to the door to hear if he was outside and I heard nothing. I looked under the door to see if there were any shoes and there was not. Despite that I knew I still had to be careful because he could be in the distance waiting for me to come out. I slowly opened the door but I stood behind the door and I looked through the crack where the door hinges were. I saw nothing so I ran as fast as I could and got a snack from the fridge and ran back. Everything was going perfectly until I got in my room. My brother Jim was waiting for me in my room when I went in there I got slapped by a whole bunch of whip cream upon my return. My cheek was stinging with pain from the slap my brother Jim gave me.

It was time for bed now and I wanted this to end the whole prank war thing. I thought to myself “but how?” The only thing I thought of was what I learned in social studies today. It was about the treaty that Germany had to accept because the whole world thought it was Germany’s fault. I thought that’s it, a treaty that's exactly what I will do. Except how will I ask my brother Jim if he wants to end this with a treaty? I can write it and slide it under his door and wait for him to respond to me? So, I start to execute the plan I wrote on the paper “ I'm tired of this, let's end it with a treaty you sign the paper and I sign it too then we’ll shake on it.” I went out of my room and it was super dark however I knew my way around because I have been living here for some time now. Then I slip the piece of paper through his door.

The next morning I went out of bed and sure enough I found the paper I wrote on the floor. I saw that Jim signed it so I signed it too. I went to go find him and I found him. We shook on it and it was finished. Then he said “I am leaving for college. Good luck.” This made him kinda sad he makes the best of the remaining few minutes he had with his brother. In the end he realized you have to enjoy everything you have while you still have it.