Life of Survival By Alicia Cruz 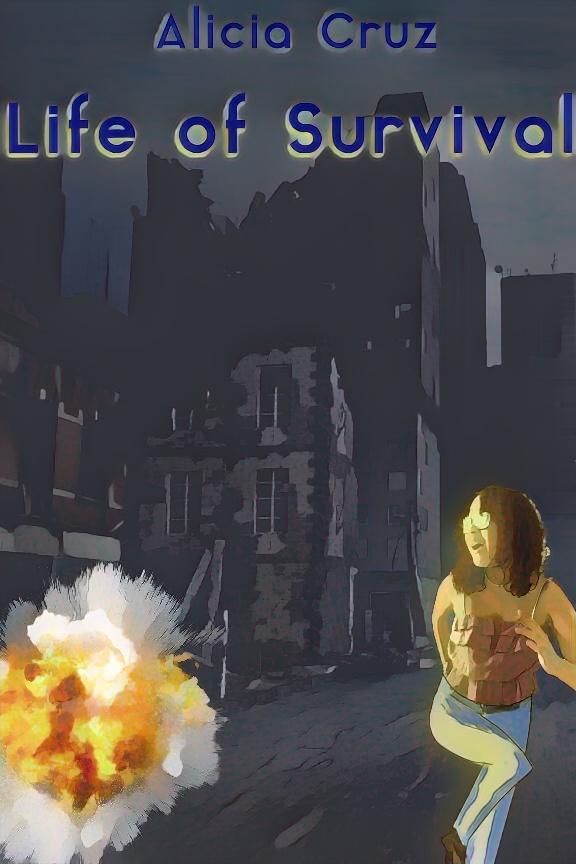 The dead have risen, and they’re hungry. Consumed with a ravenous desire for human flesh, they are everywhere. Willow wakes up to a loud BANG! “What the heck was that?” She rushed to her window witnessing smoke burst up to flames; people running around, screaming. Willow noticed a disformed, bloody, slimy, revolting creature. She ran towards her tv and turned it on.

“Whats happening?” Willow whispers to herself. “Should I go outside?...No, that’s a dumb move.” Willow rethinks her decisions over and over. “What if my mom turns into them? She hasn't been back yet.”

I remember when city officials installed the warning sirens. They said it was "precautionary" but I wonder how many people believed it. I wonder if the infection had already begun, and the sirens were confirming this city's demise. I was at work as a bank teller when the sirens went off. It started as a low howl, but within minutes it had grown to a bone-chilling wail. We all knew what it meant – get out of the city. NOW. I grabbed whatever money I could, stuffed it in my pockets and joined the crowd of panicking civilians. My plan was simple: get my car and drive as fast as I could to Texas. Get my sister and her husband and their baby girl and head as far east as possible.

I didn't make it past step one. I got to my car only to find all four tires slashed. Swearing to myself I stood in the parking lot of the bank, in the middle of pure chaos. Blood spilled on the sidewalks. Screams of terror were heard before bodies dropped in the street. I could only stare in horror at the savagery before me. It was utter mayhem. I was going to do the smartest thing I could think of: RUN.

My train of thought was broken when a teenage boy with blond hair, wearing a ripped and bloody shirt and dark navy blue jeans, spotted me. The zombie's right eye had been ripped out of his face, and he was bleeding profusely. When he emitted a loud shriek and came at me, my brain gave a jolt of energy to my legs, and I ran like lightning. I could hear his footsteps close behind me. Then another pair of running feet. And another. Soon I had a crowd of them chasing me, shrieking, groaning, and screeching at me. There could've been only a few of them, or a dozen. I didn't dare stop or slow down to look.

I saw a small group of uninfected people quickly ushering in more survivors while fighting off the infected. I ran to that house and up the steps on the porch. While I leaned over to catch my breath, one man said, “They see us. Get inside… NOW.” We stumbled and tripped over each other to get in the door. Once we were all in the house, the man shut the door and quickly nailed thick boards over the door and windows. A girl walked over to me with a rifle. “Any bites?” she asked. Again I shook my head. “Know how to use one of these?” Once again I shook my head. “Gonna have to learn if you wanna stay alive.” She showed me how to load it, aim it properly, and cock it. “When you fire, make sure you're aiming for the head. That's the only way to kill ‘em. Got it?” I nodded.

We stayed huddled together in that dark room as wide as a living room. Empty glass bottles, empty cans of food were screeching across the floor for weeks. As each day passed, the screams grew quieter and fewer. 5 zombies scratching, trying to burst open the door. There was the occasional beating, begging for help, but the pleading words soon turned into screams. Then silence. It's day twenty as I write this. They've been clawing at the door for days. The cheap wood won't hold much longer. I've given up all hope of being rescued.

My watch stopped last week. I have no idea what time it is. I can tell by the slits of light coming in from the boarded-up windows that it's sunset.

Nevada sunsets were always so beautiful.

Too bad I'll never get to see them again.

The way the door is splintering from the constant abuse, I can pretty much guarantee they'll have broken it down by nightfall. A few minutes after that, we'll all be dead.

I'm writing this for the military. If you're reading this, you're too late.